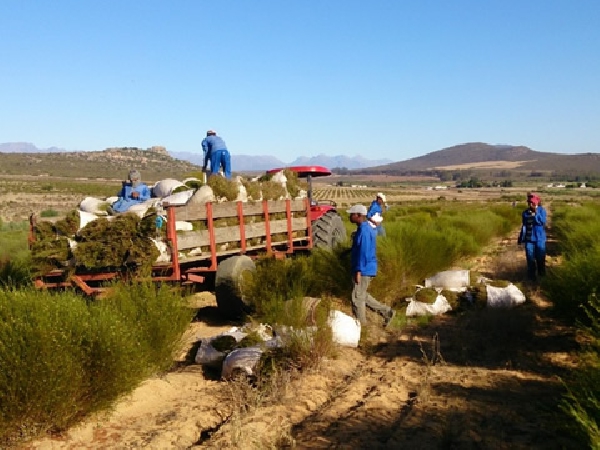 Notwithstanding the challenges that the Covid-19 pandemic brought about, it appears that red tea farmers are still positive about the establishment of new areas – even as far as the Southern Cape.

Paul Smit, director of Protea Kop Rooibos (Pty) Ltd, believes that there is still a growing demand for rooibos and opportunities still exist for expansion into new markets.’Covid-19 naturally caused a massive damper on exports and the development of new markets, but the industry was already under pressure due to drought, unstable red tree prices and manipulated production estimates. We have however learned many lessons and remain positive’.

Paul negotiated the acquisition of Zeekoevlei 109, in 2004 and started marketing rooibos under the OuHuis® brand in 2006.

Red tea is planted in winter – between 15 June and 15 August, depending on the rainy season. Unconventionally, Paul decided to add 250 ml water to the young plants upon establishment to extend the planting season. This was not general practice at the time but has become popular amongst tea growers since the Western Cape droughts of 2015 and 2017. The plants are planted with a modified planter that Paul saw at tobacco growers in Limpopo.

Paul started using Atlantic Fertilisers’ Bio Rock – composted chicken manure with added soft rock phosphate pellets – having observed results of trials on a neighbour’s property in 2006. Bio Rock is ideal for the fertilisation of organic rooibos, especially since it does not ‘burn’ the seedling. The fertiliser is band placed in rows, in close proximity to the plant at a rate of 150 kg per hectare. Atlantic Fertilisers’ focus is on the creation and preservation of a balanced ecosystem through healthy soil conditions.

Soil sampling forms an integral part to determine requirements of soil and crop and is done every six to eight years. This practice helps growers to decide whether they need to make adjustments using lime or phosphate, to restore soil balance.

Although rooibos prefers sandy soils with a low pH, good growth is even found on soil with higher carbon levels.

The first harvest of newly established red tea is known as the top-harvest or top-rooibos. This is harvested in April of the following year just after completion of the older bushes. Harvest takes place between January and April, the hot months. Paul use seasonal labour to cut the tea bushes with sickles, which are then bound together in bundles after which it is transported to the ‘kerfvloer’ (carving floor). Here the tea bushes are shredded and heaped onto the floor in so-called ‘sweet hope’ (literal translation: sweat heaps) where it ferments overnight. It is here where the tea gets its characteristic red colour and honey taste. The next morning, the tea is spread onto the floor in a thin layer for the sun to dry it. After the drying process, the tea is gathered and stored away for packaging.

Upon re-establishment of red tea plantations, a two year rest period is used to plant oats and lupins to build carbon levels in the soil after firstly ploughing the old vines back into the soil.

Did you know? Regeneration of the OuHuis® brand

OuHuis® is today a well known brand, but it was not always the situation. OuHuis® was born in the 1980’s when Bep Engelbrecht realised the value of a brandname to market rooibos.

The old house (‘Ou Huis’) which is referred to, was built on the original farm Zeekoevlei in 1885 and belonged to Willie Engelbrecht. Willie was the first farmer that started cultivating red tea as far back as 1954 with his other operations namely wine grapes, peaches, apricots and cattle and sheep. The first ‘droogbaan’ in the Clanwilliam area was constructed on Zeekoevlei 109 in 1961 and can still be seen on the property today. Tragedy came to the Engelbrecht family in the nineties when Willie’s youngest son Christie died. He was survived by his wife Bep who stayed on the farm.

Bep continued farming and the OuHuis® brand, but she later decided to rent the land to Christie’s older brother Oubaas and his son Willem, who farmed on the neighbouring farm Groenkol. It is during this time that the OuHuis® brand fell into disuse. It was only with Paul Smit’s purchase of Zeekoevlei that the brand was resurrected in 2006 and effort was put into re-establish and rebuild the brand.